Community groups in Fitzrovia and Marylebone are bracing themselves for another battle with Westminster council in advance of crucial decisions being taken on the future of Oxford Street this autumn and winter. 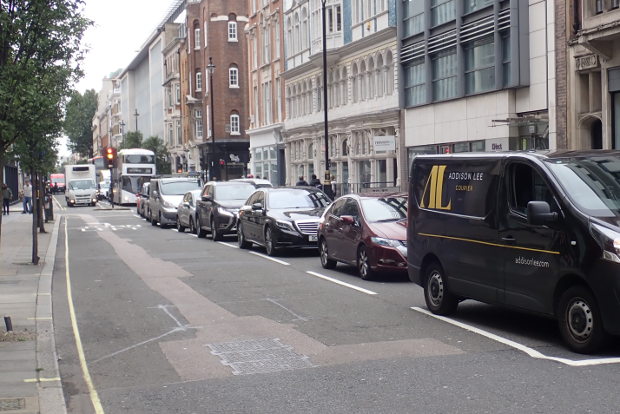 A sight and smell of things to come? Traffic on Mortimer Street queues across the junction with Great Titchfield Street on diversion due to Oxford Street road works.

While full pedestrianisation of Oxford Street is off the agenda the council have been pushing forward with a plan to pedestrianise part of the street and restrict private vehicles including delivery vans during peak traffic periods.

If given the go ahead the ‘Oxford Street District‘ plans would mean more motor traffic would be pushed north into Fitzrovia and Marylebone — though less than under the previous plans to pedestrianise the whole street.

The council propose closing a section of Oxford Street to the east and west of Oxford Circus and restricting private vehicles between 12noon and 8pm for large parts of the street.

Under plans being aired buses and taxis would continue to run along the street but would be permanently diverted around Oxford Circus through part of Fitzrovia and Marylebone.

The section of Mortimer Street bewtween Great Titchfield Street and Regent Street would become two-way and a number of one-way streets in Fitzrovia, including Newman Street and Berners Street, would change direction under the plans.

The council proposes “enhancing” some of the streets to the north of Oxford Street to offset the effects of the displaced traffic — a plan that is wholly inadequate to deal with burden of extra motor vehicles and the congestion and pollution it would bring.

“In routing all traffic around neighbouring roads it reintroduces pedestrianisation by recreating a miniature version of the previous plan — that is by creating a needless diversion around a straight line,” says the Marylebone Association.

“The extra time and hassle that this route entails would inevitably deter bus users from using it due to the extra time added to the journey and would result in traffic displacement through neighbouring areas by taxis and other vehicles trying to avoid it. This in turn will generate more pollution and congestion,” they say.

Westminster council’s reasoning is pedestrian safety due to the extra footfall from passengers that will use the Crossrail stations when they eventually open.

Yet it is not Oxford Circus station that will see the extra passengers but Tottenham Court Road and Bond Street stations — which makes Westminster council’s plans even more pointless.

Fitzrovia meanwhile has already got a sight and smell of Westminster council’s plans with the recent congestion and pollution along the entire length of Goodge Street and Mortimer Street due to a diversion because of road works on the eastern part of Oxford Street.

“Get used to it!” appears to be Westminster council’s message to Fitzrovia because much this traffic will be a permanent feature if the Tory council gets its way.

The Fitzrovia Neighbourhood Association is strongly opposed to any motor traffic being re-routed through the neighbourhood and has asked the council to bring in measures to keep the streets accessible for businesses and residents but make the district a low-traffic neighbourhood and improve conditions for walking and cycling.

The Fitzrovia West Neighbourhood Forum has stated that the “Oxford Circus proposals would lead to increased congestion, gridlock and air pollution to our area, and would have a detrimental impact“.

“We want to make the Oxford Street District a better place to live, work and visit – doing nothing is not an option.

“We are listening carefully to people’s concerns in order to develop a scheme that future proofs this iconic part of Westminster and the West End.

“The scheme has been developed using an evidence based approach that fully assesses potential traffic and air quality impacts. Minimising disruption caused by deliveries, improving air quality and reducing congestion are absolutely vital to making this scheme a success. Which is why we’ve committed to monitoring the volume of traffic and level of air pollution before and after schemes – our vision is ultimately for zero emissions in the Oxford Street district.

“Whilst there’s widespread support for our approach, we have remained in dialogue and discussion with local community groups, including Fitzrovia, businesses and we welcome their invaluable knowledge as we move towards delivery of our ambitious strategy that will improve the Oxford Street District for everyone.”