An exhibition celebrating the life of the leading black campaigner for the abolition of the transatlantic slave trade will open this month at a venue on Tottenham Court Road.

An image of Olaudah Equiano from the mural in Goodge Place.

Olaudah Equiano (1745-1797) rose to prominence in the late 18th century and his book “The Interesting Narrative of the Life of Olaudah Equiano or Gustavus Vassa, the African” was one of the earliest first hand accounts of life in Africa, the horrors of the Middle Passage and enslavement.

“The book was an important tool in the abolition campaign and remains relevant today as a fascinating historical document and an inspiring story of success against the odds,” says the Equiano Society which is organising the exhibition.

Equiano was torn apart from his birth place in West Africa after he was kidnapped and enslaved when he was only 11 years old. He was transported to the Caribbean, then to Virginia, where he was resold to Michael Henry Pascal, a Royal Navy lieutenant who renamed him Gustavus Vassa. Equiano spent his teenage years on board Naval ships engaged in the Seven Years War against France where he made time to educate himself, learning to read and write. 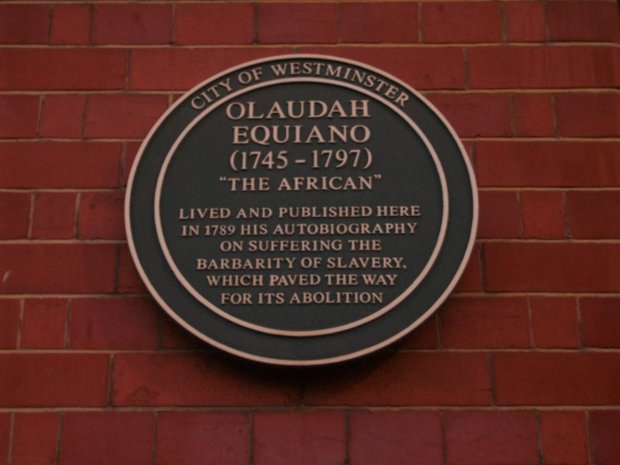 Green plaque on the building which now stands on what was 10 Union Street.

In 1766 Equiano bought his freedom from slavery and arrived in London two decades later where he took a leading role in the movement to abolish the African slave trade. In 1788 he moved to 13 Tottenham Street in Fitzrovia and a year later went to live a few streets away to 10 Union Street (now 73 Riding House Street) where he penned his autobiography, as noted on a green plaque placed on the current building in 2000.