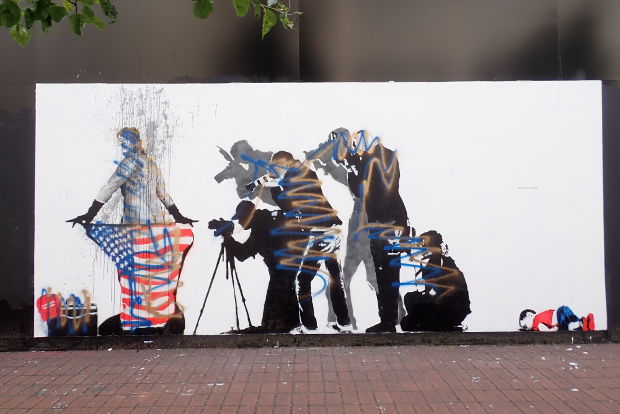 A street artist has mocked US President Donald Trump on the eve of his arrival in the UK for a three-day state visit.

The artist who goes by the moniker Loretto stencil-painted four satirical images on a boarded-up, disused building on the corner of Great Portland Street and Carburton Street in Fitzrovia over the weekend. Trump landed in the UK this morning.

The artist was caught on camera by a CBS reporter on Sunday. Simon Dingley said trump was being “mocked publicly”.

The images show a caricature of Trump shagging the Statue of Liberty, wearing a superman outfit with a turd emoji beneath his suit, and appearing half-naked in front of photographers with a dead child to one side.

However, shortly after the images were painted, Loretto’s work was daubed in paint and sprayed by person’s unknown.

Loretto has previously stencilled images on the streets of Fitzrovia.