Last week’s news in the Evening Standard about cars, taxis and lorries being banned from Tottenham Court Road in three months’ time (sic) brought jeers from drivers and cheers from active transport campaigners. 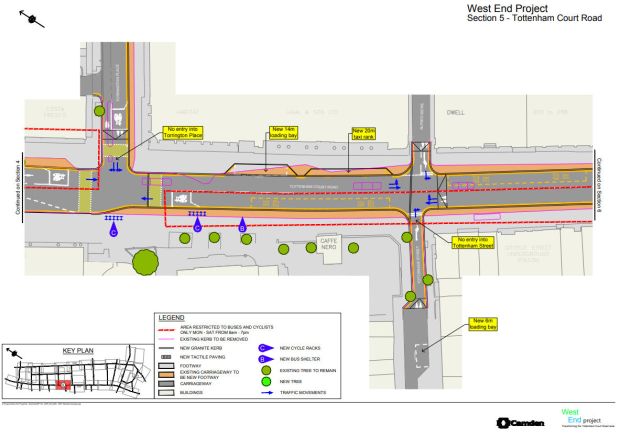 Tottenham Court Road will have taxi ranks and loading bays at several points along the street.

But the Standard’s story was so full of errors that it failed to describe what is actually happening. Cabbies may be pleasantly surprised while environmental campaigners and local residents won’t be so happy with the results of Camden Council’s £35m West End Project.

Tottenham Court Road is due to be converted from one-way to two-way traffic in March this year and buses will run in both directions from three new bus stops on either side of the road.

But despite what the Standard stated the street will remain open to all traffic in both directions for the time being, except for some sections southbound.

With the south bound buses transferred to Tottenham Court Road, work will start on improving the pavements and providing semi-protected cycle tracks on Gower Street before converting the street to two-way traffic by March 2020.

At the same time Camden will carry out “improvements” to Whitfield Gardens open space and create some small pocket parks dotted around the area. There will also be a new linear park created at Alfred Place with a loading bay and a one-way access road running through it.

When all the public realm projects are completed in March 2020 there will be a rather complicated set of restrictions for private motor vehicles, including taxis, on Tottenham Court Road between 8am and 7pm Monday to Saturday.

Tottenham Court Road will consist of eight sections and roughly half the street will be open to buses and cycles only during the restriction times.

Maps showing details of the West End Project when it it completed. Source: camden.gov.uk/westendproject/maps/

However, there will be several taxi ranks and loading bays on the road itself and in side streets very near by.

The main north-south route through the area for all traffic including cycles will be Gower Street and Bloomsbury Street.

The Standard reported that the taxi trade says the scheme will “worsen congestion and increase pollution in surrounding streets”. Vehicles will indeed be diverted through side streets but the irony is that the London taxi fleet is responsible for huge amounts of air pollution.

The Fitzrovia Neighbourhood Association says that pollution from NO2 is already above legal limits at most locations in the area and is calling on Camden and Westminster councils to restrict east-west traffic in order to clean up the district’s toxic air.

Camden’s West End Project — like Westminster’s Oxford Street plans — focuses far too much on the commercial and institutional part of the district. Thousands of residents will be affected by increased traffic on Charlotte Street, Torrington Place, Grafton Way, Maple Street and University Street.

While the new park at Alfred Place will take pressure off Fitzrovia’s other open spaces, Camden plans to remove much of the greenery from Whitfield Gardens — against its own open space and biodiversity policy.

Only a comprehensive scheme for filtering out through motor traffic, increasing greenery, and enabling walking and cycling in Fitzrovia and Bloomsbury will really address what air pollution expert Dr Gary Fuller calls The Invisible Killer. Camden’s Tottenham Court Road makeover is a missed opportunity.

Update 28 January 2018. The incorrect reporting was also repeated on London Live TV, and surprisingly the Camden New Journal repeated the ES’s mistakes and added some of its own.

Update: This article was corrected on Saturday 23 February to state that there would be some restriction on southbound TCR traffic when the road goes two-way this spring. 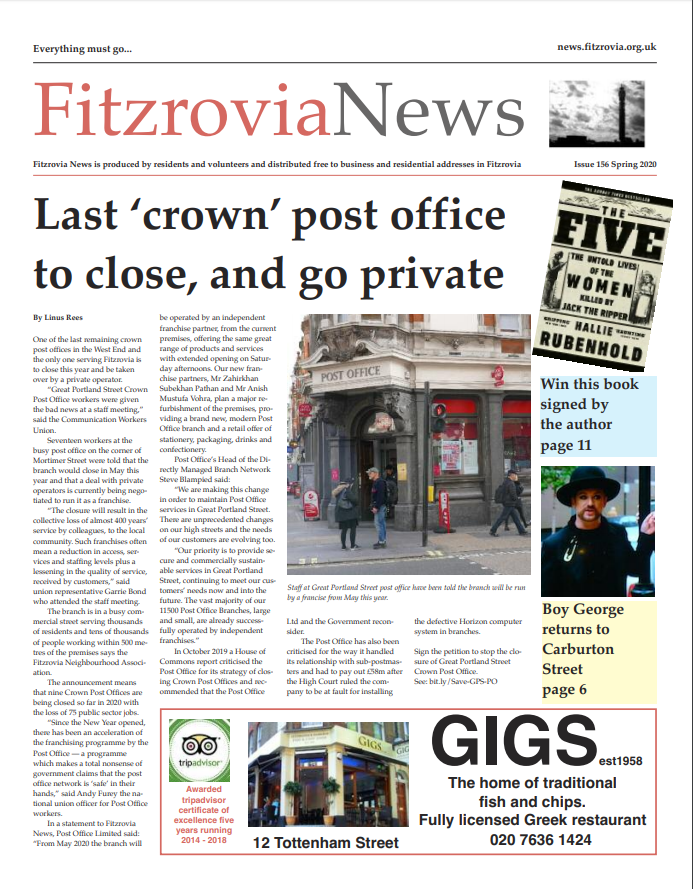