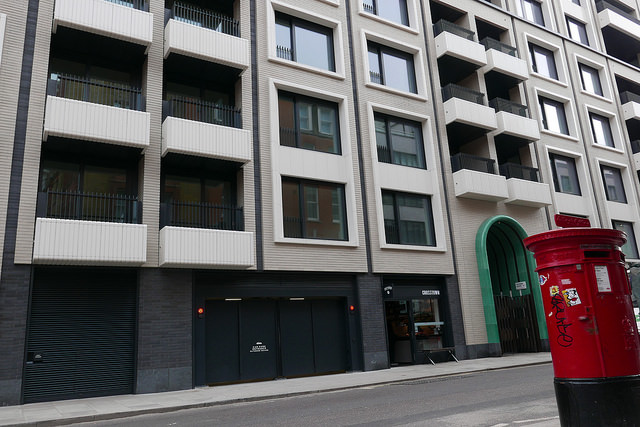 A Westminster council planning committee is being asked to approve a legal agreement to enable affordable homes at a landmark West End development to be re-sold at market prices because mortgage lenders will no longer finance the type of property offered.

The “intermediate affordable” homes are at Rathbone Square, part of a major development by Great Portland Estates, on the site of a 1950s-built Royal Mail distribution centre, Rathbone Place, which was demolished to create 142 luxury flats, shops, restaurants, and an office complex now occupied by social media giant Facebook. The site is very close to Tottenham Court Road station where Crossrail trains will start running on the Elizabeth line later this year.

A council report states that 22 affordable apartments which face onto Newman Street have been transferred to Westminster-based registered provider A2Dominion who have submitted a planning application to amend the terms of the s106 agreement because “mortgage providers are no longer lending on products of this type”.

The existing s106 agreement struck in 2014 states that the one bedroom flats are available to eligible households on a discounted market sale (DMS) basis, which means they can buy the property at a percentage of its current value and sell it again at the same percentage of market price to another eligible buyer.

The units are between 40 and 45 square metres in size and are intended for one or two people. To qualify potential buyers must have lived or worked in the City of Westminster for a minimum of 12 months, do not own another property, and must have a household income between £58,000 and £90,000.

“However, as this does not allow a unit to be sold on the open market in the event of it failing to be sold according to the above criteria, A2Dominion have advised that no lender will take part in the scheme,” says the report.

According to documents submitted in support of the application, lenders want to be able to sell the property on the open market if they have to repossess and recoup their debt if the owner defaults on payments, and they don’t want an owner to be lumbered with a property they cannot sell or loses its value because its sale is restricted. Advisors for A2Dominion state that lenders “will not accept” the terms under which the flats can be resold.

The same model of affordable housing had previously been used in 2010 for a development of 32 one-bedroom flats at Fermoy Road in Maida Vale by another Westminster council approved provider, Pocket Living, who used the Halifax and Nationwide as lenders. If the Fermoy Road scheme was launched today it, too, would “not be acceptable” to the lenders says the advice.

Councillors at next Tuesday’s planning committee will be asked to amend the legal agreement to allow the discounted flats to be re-sold by their owners on the open market if no eligible household is able to complete a purchase after 20 weeks of it being offered for sale.

The council report, which is recommending approval of the application, states the amendment “is considered to be partly an academic exercise to unlock lending from mortgage providers, as it is considered that there will still be many eligible households wishing to participate in such a DMS scheme when units come up for resale, but in the unlikely event that this does not happen and a unit is sold on the open market, the Council will be able to receive a sum for recycling into affordable housing provision.”

However, the use of s106 agreements to get cash payments instead of providing on-site affordable housing is a long running bone of contention in Westminster.

Nick Bailey of the Fitzrovia West Neighbourhood Forum said accepting payments in lieu “do not contribute to creating a socially mixed community” and money from the affordable housing fund is “very rarely spent in the West End ward”.

Just 17 percent of the homes at Rathbone Square are classed as “affordable housing”: 22 one-bedroom “intermediate affordable” flats built on site, and 18 larger social-rented units off-site at Mortimer Street and Great Portland Street. Most of the social-rented homes were conversions from existing market housing.

A Westminster City Council spokesperson said: “The council is unable to comment on outstanding planning applications. This scheme will be considered on its merits and in line with council policy at the planning committee.”