Local author Stephen Oram signed copies of his second novel last week at a Camden community library and talked about what inspired him to write. 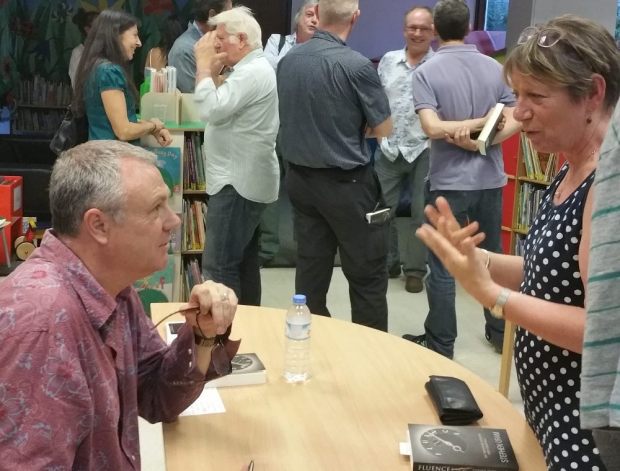 Stehen Oram talks with a reader at Primrose Hill Community Library about his latest novel.

Fluence: ten thousand minutes and counting — a story set in a dystopian near future — was launched on Tuesday evening at Primrose Hill Community Library, in conjunction with Primrose Hill Books.

Brenda Stones from the library introduced Oram who then read extracts interweaved with some explanation of the inspiration behind the book. He explained that many people felt dehumanised by corporations. For example, standing in a supermarket queue being shouted at to use the self-checkout, annual performance reviews setting your “position” for a year, and nobody really knowing what the social media algorithms (and others such as Google) have been written to achieve.

Oram who lives in Cleveland Street told Fitzrovia News: “I was really pleased to launch with an independent bookshop and a library run by the community, because not only are they fantastic in their own right but they are examples of what we might lose if corporate power and their algorithms take too much control.”