Every Wednesday at the Fitzroy Tavern in Charlotte Street since 1999 — regardless of football, wars, bird flu, or lack of comics — MCs Brian & Krysstal and Anthony Miller, have proudly presented the Pear Shaped Comedy club. But all good things come to an end… for the time being anyway. 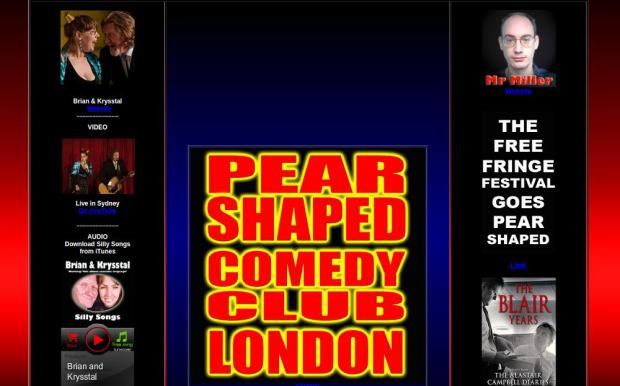 Pearshaped Comedy club has been at the Fitzroy Tavern every Wednesday.

This Wednesday 24 June will be the last load of laughs as the Fitzroy Tavern finally closes for a year to undergo a major refurbishment.

“The refurb of the Fitzroy has been put back several times but the management assure us that this time it is actually happening and I believe it’s due to start at the end of the month … our last date here is therefore Wednesday 24 June,” says Anthony Millar who took time to recall the precious moments and people for Fitzrovia News.

Prior to arriving at the Fitzroy, Pear Shaped was run in a huge pub room in the Oval which they never quite managed to half fill.

“Putting a club with the budget the size of Pear Shaped in a massive room was silly so Brian decided that the Oval Comedy Club had gone Pear Shaped…” says Millar.

Pear Shaped is a testing space so it’s part open mic and part a professional gig and that’s one reason it’s kept going, he says.

“In the early days of Pear Shaped my job was performed by Paul Foot who left to create his own Guild of Paul Foot Connoisseurs,” and continues to this day.

“When there was an unavailability of punters Paul would supply ‘interference’, invent characters and pretend to bicker with Brian. Perhaps because it’s so intimate the club worked better with more than one MC so we always have two or three …or even more.”

Eventually they settled on a formula of two MCs and Al Mandolino (earlier El Nino) playing music at the start and in the interval.

“One year Brian went up to the Fringe where he met and later married Vicki de Lacy (Krysstal) and they became a double act. As Vicki is Australian they went to tour Australia a few times and this left Paul Foot operating the club with the help of the late Norby ‘granddad from hell’ West (Richard Elkan).

“One day Aaron Barschak (the Comedy Terrorist) turned up and got a woman to smear him all over with Häagen-Dazs ice cream. It was very difficult to clear up. This was the last straw for Paul Foot and he resigned so when Brian next went abroad Dave Dynamite took over Paul’s job with the help of Stephen Carlin.

“Eventually Brian and Krysstal came back from Australia and I was elevated to Managing Director when Brian went to Australia yet again. I hired Mike Belgrave to help out and like Paul, David and Stephen he quickly became depressed and wanted to leave.

“It dawned on me this might be due to our appalling lack of quality control. In those days we literally just put people on in the order they rang up because before email when all the bookings were done by phone booking any gig was so time-consuming that was about the only way to do it. So when it was bad, it was truly dreadful. As one disgruntled punter put it — ‘It’s called London’s 2nd Worst Comedy Club, and it really is!’.

“We had the legendary Jimbo as a regular MC for a long time,” says Miller.

They also booked an Australian guy called Jimbo to MC too when he visited the UK. “Which saved changing the posters”, says Miller

A massive increase in ticket sales was achieved by asking “the beautiful Ava Alexis to do the door,” says Miller. “She used to be the Chuckle Club’s best asset. Now she is my best.”

Big and small acts have played the club, he recalls.

“Stephen K Amos died horribly. He tried material, banter, material again … all he got were blank looks. Eventually we realised we’d taken a bulk booking from the local language school and they just didn’t understand a word he was saying.

Are the punters miserable we asked Mr Miller?

“No. But there is such a thing as the wrong sort of punter. We used to have a group who came regularly and claimed to be the local bomb squad. Despite hating all the acts they would keep regularly returning and paying to sit in silence through every act occasionally saying ‘that one’s funny’. Eventually one of them talked through one of the acts and Vicki asked them to be quiet. ‘If that bird ever talks to me like that again we’re never coming back,’ said their leader. ‘Fine,’ I said. They didn’t. Neither fortunately did the group who showed their appreciation of Frank Sanazi by shouting ‘bring back Hitler’,” he recalls.

Is Peter the landlord of the Fitzroy a miserable landlord?

“Peter is a fantastic landlord. We leave him alone to cheerfully run his pub like clockwork and he leaves us alone to run our club like the Antikythera mechanism. He and all the staff have always been hugely supportive.”

So farewell Pear Shaped in Fitzrovia, and best of luck at you new venue later in the year.