An exhibition of paintings by the artist Adrian Heath will open at a Chelsea gallery next week and will contain works spanning five decades. 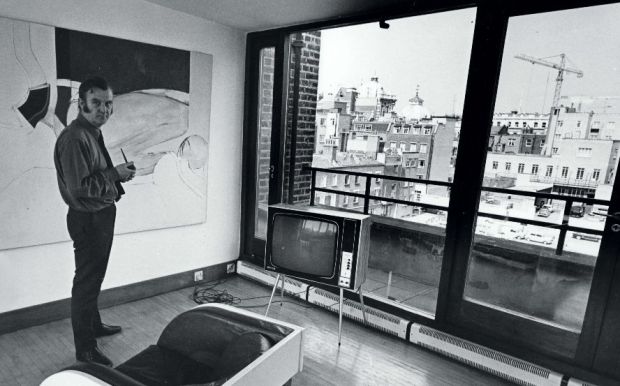 Heath (1920-1992) was a major figure in the development of abstract art in England during the forties and a key proponent of Constructivism. With his wife Corrinne their home at Fitzroy Street and then Charlotte Street was at the hub of an artistic community in Fitzrovia.

“The activities of the artist and writers who talked and squabbled in its pubs are immortalised in Julian Maclaren-Ross’s Memoirs of the Forties, and in 1949, when Adrian and Corinne Heath moved to a flat with two studios at 22 Fitzroy Street, its ramshackle, war-damaged houses were still honeycombed with rickety studios which had been in occupation by successive generation of artists since the 18th century,” writes Jane Rye in the catalogue for the exhibition.

Heath was to become an indispensable link between the abstract painters of St. Ives and their Constructivist counterparts in London. He was also a founder member of the Charlotte Street Association who campaign to increase social housing and preserve the character the area around Charlotte Street and in Fitzrovia.

The exhibition covers five decades of Heath’s work, from the 1940s through to the 1980s.