When Herman Ze German’s hoarding first went up in Charlotte Street I was impatient for them to hurry up and open. I love the Old Compton Street branch — much used by local Soho workers and revellers for their speedy, no-nonsense, reasonably-priced offerings of German sausage, schnitzel, chips and beer. If we have to have yet another chain in Fitzrovia, at least let it be a good and independent one based on a relatively original idea. 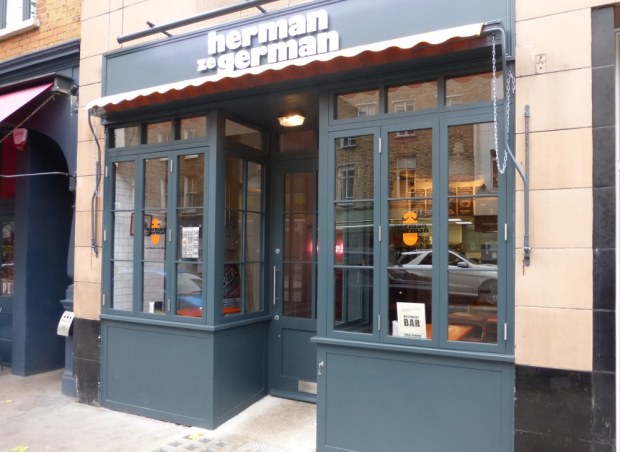 A few doors from where Schmidt’s used to be on Charlotte Street. Herman Ze German offers proper sausages and much more.

It was half term and I had nephews aged 11 and 14 and my 80+ year-old parents-in-law in tow. We didn’t want to blow £100 refuelling the five of us but we still wanted some decent grub and, as both the kids and the grown ups all loved the idea of trying “proper” German sausage, Herman Ze German was a good option.

Just south of Goodge Street, two doors down from where the famous Schmidt’s restaurant and deli was in the days when Fitzrovia was home to the German quarter and the street was known as Charlottenstrasse, the best thing about Herman Ze German was definitely the “wurst”.

The utilitarian, but welcoming, ground floor has a counter service where you make your order and pay — and your order is brought to your table. Our party of five would have been a bit cramped upstairs so we headed to the basement where there are bigger tables — and a cosy-looking bar.

In the Old Compton Street branch you can get a “No carbs, Fraulein” sausage-only deal without the bun for £3.40 (I’ll let them off the lame sexism as I think this is their idea of a joke and they have had to put up with nearly 40 years of Fawlty Towers). Although I was later told that the prices are the same in Fitzrovia, Soho and their Villiers Street branch this option was not on the menu in Charlotte Street (although you can request it). If bread is not your thing the option here is sausage and salad, which comes in at £6.75. The salad is rather underwhelming with woolly bits of apple and not worth the extra money.

But the main attraction at Herman Ze German is undoubtably the sausage: smoked pork Bockwurst, minced pork and veal Bratwurst or chilli-spiked beef and pork Chilli Beef. They are all made in the Black Forest by a butcher called Fritz and are both lactose and gluten free. These juicy, meaty delights are prize-winning sausages in a country that takes sausages very seriously. Try them and you’ll see why.

Wurst in a roll is a very reasonable £4.45 — or you can have the sausage, pommes frites and a soft drink as a “deal” for £8.55 — which is what the kids eventually went for. They found the menu very confusing and short on description — we all did — mostly because they had crammed too much on one side of an A4 sheet. The grandparents went for Currywurst (sausage with curry sauce and fries at £6.45) and Schnitzel in a roll (pork or chicken with tartare sauce, £7.25) after consultation with the staff who were both friendly and helpful — once we had asked for their help.

Although it look and feels like a table service restaurant downstairs the system is the same as upstairs — you order at the bar, pay and your food is delivered. This is where it comes unstuck. Their “system” demands that you pay up front. So, if you want another drink — or pudding or coffee — you have to get up and make another payment. Not only is that not very convenient — but it felt like we were being treated as if we were going to “do a runner” — unlikely with an 11 year-old, a 14 year-old and two octogenarians. There was nobody else down there but they were still unable to to keep the tab open until we had finished our meal.

This system works upstairs — it’s clearly set out like that — but downstairs it felt rude and unwelcoming. Florian Frey (AKA Herman) says they are looking into changing that in the evenings in the future.

The kinder enjoyed the food but couldn’t understand the menu.

Matthew (aged 11) says he liked the sausage and he thought the chips were good. Rhys (aged 14) says he thought the food was really good and he would like to go there again but he didn’t understand the German on the menu.