Works to improve The Warren open space at the north end of Whitfield Street have this week been completed with a newly refurbished public area, toddler play space and multi-use games pitch. The works were due to be completed in the early summer, however difficulties were encountered due to a large amount of reinforced concrete being found on the site. 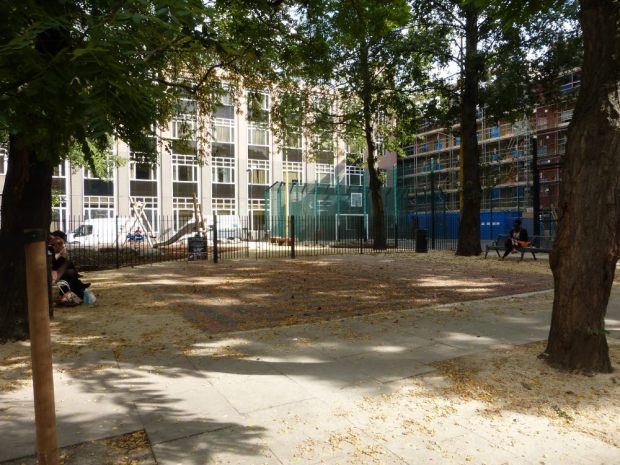 A refurbished open space at Whitfield Place was finally opened to the public this week.

Councillor Sally Gimson, Camden Council’s cabinet member for sustainability and environment said: “The improvements to Warren Playground required digging works to the pitch site. Unfortunately during these an unexpected layer of concrete was discovered which requires further excavation and a subsequent change to the construction methods of the new pitch.”

The improvement of the open space will cost £174,000 and is funded by Camden Council through section 106 and capital funding.

The multi-use games area at the Warren has been resurfaced with a porous tarmac finish and improved drainage. There was considerable discussion around the choice of surface for the games area during the engagement stage of this project. The porous tarmac surface will achieve an improved, playable surface, but which will also be flexible in terms of potential conversion to other sports surfaces in the future, should they be deemed appropriate.

Frank Dobson MP opens the Warren Playground in November 1979. From Tower no 57, December 1979.

The playground and open space was first opened in November 1979 by Frank Dobson MP. The money to create the public park was raised over 10 years and came from grants and public donations, reported Tower community newspaper.

The management of the commercial bookings of the games court has since 1979 been managed by the Fitzrovia Play Association who, following the consultation stage of this refurbishment project, surrendered its lease earlier this year and the right to manage the games area.

Fitzrovia Youth in Action (FYA) is now developing a proposal to manage the ball court and they have secured some funding from Derwent London’s Community Fund which they could potentially use to upgrade the pitch surface to an artificial turf surface if a suitable management agreement were to be reached with Camden.

John Davies of Derwent London told Fitzrovia News: “As part of the first year of the Derwent London Community Investment fund we awarded Fitzrovia Youth in Action £30,000 to support their project to re-surface the multi-use games area at The Warren and set up a local football league.”

Fitzrovia News understands that Camden Council are currently considering a proposal by Fitzrovia Youth in Action which may offer a sustainable business model to support the management and ongoing maintenance of the pitch. Camden does however acknowledge the concerns that an upgraded astro turf type surface could exclude other types of sports such as basketball and this will need to be balanced against the potential benefit of the FYA proposal within the decision making process.

New housing is currently being constructed a few metres from the games area. Previously the housing site was commercial but planning permission was given for affordable housing to be built on the site. There has been some concern expressed by community groups that there could be a conflict between the housing and the sports pitch.

Planning permission for the housing was given several years ago despite concerns raised at the time by community groups that it was not a suitable place for the housing.

Alternative sites for the multi-use games area were investigated in the Open Space and Public Realm Study as part the Fitzrovia Area Action Plan, however, no suitable location was identified. The Study reported that improvements to The Warren “Should be pursued as a high priority”.