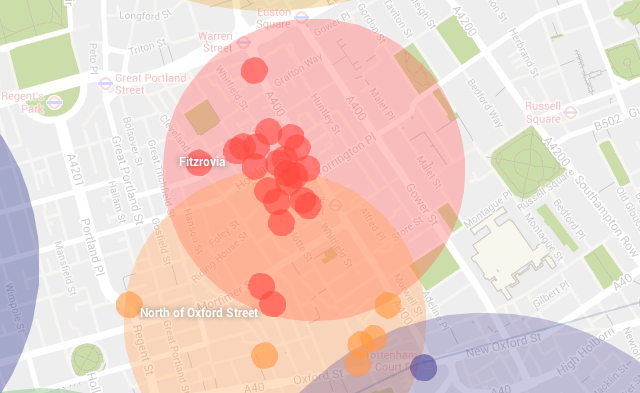 Derwent London have today announced its second round of community grants with £75,000 of funding shared between seven organisations in Fitzrovia.

Three community groups have been awarded grants of approximately £15,000 each: Fitzrovia Noir for an art project, Fitzrovia Neighbourhood Association for women’s health and exercise, and Upbeat Music to deliver a series of music workshops for people with mental health problems.

Smaller grants were awarded to four organisations: All Souls Clubhouse for an older people’s project and kitchen facilities, All Souls Primary School for a photography project, Women Like Us to support working parents, and ArtFitzrovia an independent art collective working with homeless adults.

Eleven other applications for funding from community and business groups were unsuccessful.

The company said in a statement that a number of interesting proposals were submitted as part of the application process with applicants invited to attend a workshop in April to present their projects, meet other community members and groups and contribute to the decision-making process.

John Davies, head of sustainability at Derwent London, said: “We are very pleased to have seen such an increase in applications this year and some really good ideas. We were once again faced with a difficult challenge of allocating the funds. Feedback at the community workshop was again invaluable in terms of informing the final decision and allowing community stakeholders to participate actively.”

Since 2009 Derwent London has earned itself a formidable reputation in Fitzrovia. The London-focussed real estate investment trust (REIT) has a property portfolio valued at £3.4bn at 31 December 2013 (up from £3.1bn at 30 June 2013) and is steadily ravaging parts of Fitzrovia.

In 2011 Boris Johnson approved plans to part-demolish and redevelop the Saatchi & Saatchi building on Charlotte Street, overturning Camden Council’s refusal to grant planning permission because of a lack of affordable housing and contributions to public open space.

In 2012 Derwent pushed through its plans to create a business improvement district in Fitzrovia. High-profile local resident Griff Rhys Jones spoke out against the proposals. The controversial scheme dragged Camden Council into the mire which led to its cabinet member Valerie Leach admitting mistakes had been made and that there should have been public consultation.

Derwent was earning itself a reputation it probably didn’t relish. Then in 2013 Derwent announced plans to provide £250,000 towards community projects in Fitzrovia. The grant package was put together in conjunction with Soundings a company specialising in public and stakeholder consultation.

Known as Derwent’s community investment strategy it is led by Georgina Chimarrides who had also worked as project coordinator on the consultation for the Heygate Estate masterplan in Elephant and Castle for Lend Lease. Soundings’ involvement was derided by community groups at Elephant and Castle. Heygate is now a byword for developers (and councils) running roughshod over local people.

Nevertheless Derwent’s current round of grant offerings in Fitzrovia have been welcomed in a climate of austerity and a diminishing supply of voluntary sector funding. Derwent will likely win some friends from the grant recipients but there are also those that were unsuccessful.

The allocation of a grant to the Fitzrovia Neighbourhood Association (FNA) is also likely to raise an eyebrow or two. The FNA is also a publisher of Fitzrovia News which has been reporting critically on not only Derwent but its business improvement district.

Local people are likely to question the impartiality of this newspaper to report in the future what Derwent and their colleagues at the Fitzrovia BID are up to in the neighbourhood. However, Fitzrovia News editors would like to assure its readers that we will continue to do our very best to report the facts as we find them and keep our readers informed in a timely manner.