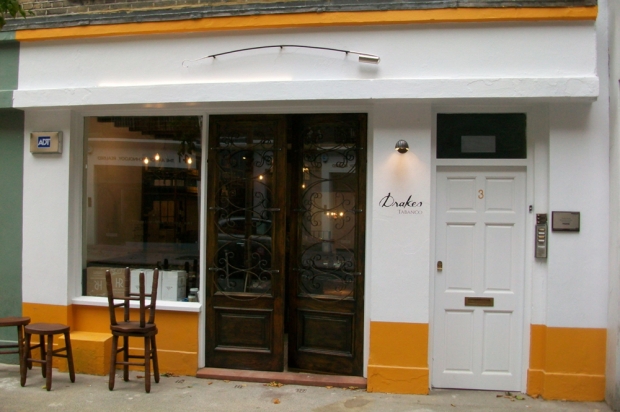 Shirtmaker to sherry bar: One of many new businesses taking advantage of the relaxation of planning regulations which allows premises under 150 square metres to undergo temporary change of use without permission.

Fitzrovia is losing its variety of retail frontages to wine bars and restaurants as the relaxation of planning regulations takes effect. It is leading to a saturation of places to eat and drink, a change in the character of the streets, and the variety of Fitzrovia is being diluted.

Drakes Tabanco at 3 Windmill Street is an attractive-looking shopfront and business and is one of the first to open, registering with Camden Council a temporary use of the premises as a restaurant in September 2013.

The shop was previously Russell and Hodge, bespoke shirtmakers who have now moved to a new shop at Walthamstow E17, having been priced out of Fitzrovia.

Another shop to make use of the planning changes was Tesoro on Goodge Street. This was previously Game Focus a video game shop, which closed in April 2012. Tresoro opened as a cafe and ice cream parlour in June 2013, then notified Camden that they were going to use the premises as a restaurant from July. It subsequently became Piano Piano a Mediterranean restaurant.

Both Drakes Tabanco and Tresoro applied for and were approved alcohol licences.

The owners of Vagabond in Charlotte Street have notified Westminster Council of a temporary change of use to A3.

Vagabond at 25 Charlotte Street was previously a Nicolas wine merchant. Vagabond registered a temporary change of use of the ground floor and basement from A1 retail to A3 cafe/restaurant with Westminster Council in December 2013.

Then in February a fourth retail premises announced that it was making use of the new regulations and changed to a restaurant. Salento Green Life in Goodge Street which had also been granted an alcohol licence informed Camden Council that it was changing to a restaurant.

A briefing note by planning consultants CBRE in May 2013 explains that legislation now allows for the temporary change of use for a two year period of premises currently classed as A1 (shops), A2 (financial and professional services), A3 (restaurants and cafes), A4 (drinking establishments), A5 (hot food takeaways), B1 (business), D1 (non-residential institutions) or D2 (assembly and leisure). Any of these use classes can change to A1, A2, A3 or B1 for a single continuous period of two years without planning permission.

The only exceptions to this is if the premises is more than 150 square metres; the flexible permission has been used before; the building is in a military explosives storage area or safety hazard area; or if the building is a listed building or a scheduled monument.

After the two year period the premises must revert back to its previous use class unless full planning permission is given for a permanent change of use. And this is where conflict will arise.

The temporary conversion from A1 to A3 will likely require an applicant to make some capital investment, and one might ask whether it is reasonable for an applicant to make that investment without some expectation that the “temporary” use will last longer than just two years. It raises the question of who is advising the proprietors of the restaurants and what are they being told. Are they being led to believe that Camden and Westminster council’s will give them permanent change of use?

At the same time the council’s planning committee will hear representations for keeping retail frontages. Many local people regard the preservation of small independent and neighbourhood-serving retail as a critical issue for Fitzrovia. This is what has been attractive about the neighbourhood and given its much loved character.

The national planning policy allowing “temporary” conversion of A1 shops to A3 restaurants is a worry. While restaurants are enjoyed by many people such a concentration of them is regarded by residents as a problem because of nuisance from noise and the extra motor vehicle traffic they attract (as I’ve said before).

Will all four sites be given permanent planning permission for restaurant use? One owner just shrugged his shoulders when we asked. “If they don’t give me permission, I’ll just run it as a wine bar instead.”

Strictly speaking, a wine bar needs to apply for what is called A4 use, but increasingly this is
not being done or enforced.