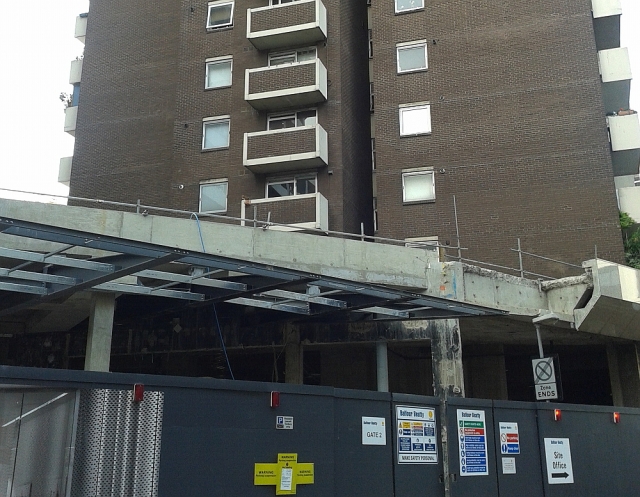 Derwent London is demolishing offices underneath Camden Council flats in Gresse Street where over 100 people live.

By News Reporters People living in flats at Gresse Street are suffering from extreme levels of noise and vibration from works to a neighbouring office block in Stephen Street being carried out by building contractors Balfour Beatty on behalf of Derwent London.

Residents told Fitzrovia News how noise and vibration during demolition and contruction works six days a week by contractors Balfour Beatty is making their lives a misery.

Gary Comenas who lives on the fourth floor at 25 Gresse Street says that the noise, dust and vibration is “putting residents through hell”.

“Can you imagine how horrible it would be if your home shared a wall with a construction site and your floor was the ceiling of such a site? That is the situation here, particularly for residents on the first floor. Both the area under them and the area next to them are being demolished and rebuilt. I’m on the fourth floor and the vibrations of the building and noise have been unbelievable. I’m not usually that bothered by noise but this is something else. The whole building shakes,” he said. 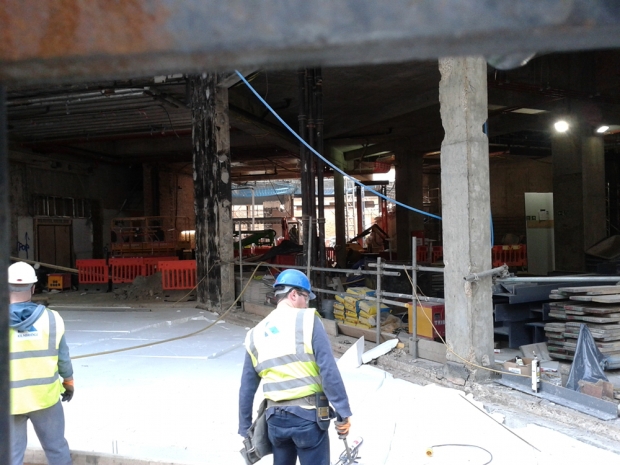 Demolition site underneath block of flats where workers for Balfour Beatty have been breaking concrete.

Mr Comenas lives in one of the 92 flats at 25 Gresse Street which is owned by Camden Council. He has long-term health problems but he is more concerned for the well-being of his neighbours some of who are disabled and have young children of primary school age.

“There are several people recovering from strokes in this building as well as wheelchair users, those with long-term health problems and elderly people. Because Derwent’s hoarding cuts off one side of the pavement, residents with mobility issues have major problems getting to the local shops. A kerb is nothing for a healthy person to manoeuvre but for the residents who have mobility problems, it is like climbing a mountain,” said Mr Comenas.

“One of my neighbours is a single parent with two young children all living in a small flat. When her children are off school the whole family have to put up with this awful noise. It’s not fair,” he said.

Disabled residents have had difficulty since the hoarding blocked the pavement.

A reporter from Fitzrovia News visited the building to speak to residents and to find out more about what was going on. All the residents we spoke to complained about the noise and vibration and complained that Camden Council is doing nothing to help them.

Our reporter had to shout to make himself heard when he visited just before 10am on Monday. During the visit there was loud drilling going on and the whole building was vibrating. When that stopped our reporter heard someone using an angle grinder to cut through steel roofing material. He looked out over the balcony from one of the flats to see a construction worker cutting through the sheet steel with orange sparks flying. 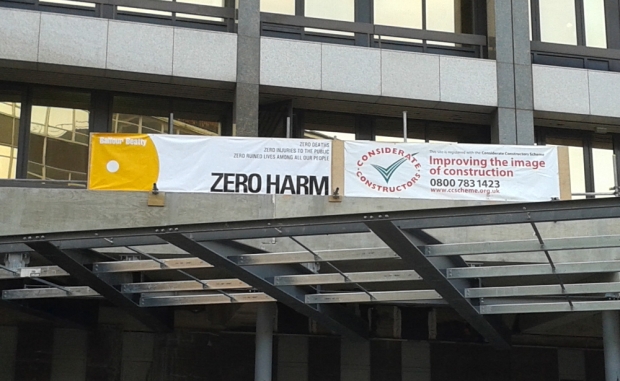 Mr Comenas said they do the grinding during quiet periods. The drilling and hammering is carried out during the loud periods.

The block of flats which was built in the late 1970s and contains one- and two-bedroom flats and are part of the Central Cross complex on Tottenham Court Road. Camden Council own the headlease of the 92 flats while property developer Derwent London own the freehold of the entire site which is mostly offices and retail units.

The residents say they have had no support from Camden Council who they are either paying rent to or are leaseholders. No-one has contacted the residents and offered any help or support said one woman who didn’t want to be named. The woman also said her young son was frightened by the building works and feared the building was going to fall down because it was vibrating so much.

Mr Comenas says the residents are being made to suffer while Derwent London profit: “The only people benefiting from this project is Derwent. They will get the rent from the increased office space, but what about the residents? They’re the ones most affected by the project, yet they get nothing. It has been a particular hardship for the ill and vulnerable residents,” he said.

Signs say keep noise to a minimum. But is anybody listening?

Many of the residents say they want some sort of compensation, but according to emails seen by Fitzrovia News this has been refused. Instead, residents have been told that the entrance hall of the block of flats will be improved and this will be sufficient compensation.

In a newsletter sent to residents Derwent London and Balfour Beatty said: “We are pleased to tell you that the heavy bulk of the demolition works will be over by 5 July 2013, and work affecting your building will be finished by the end of September 2013.”

Last year Camden Council drew criticism from residents in Fitzrovia after they allowed Derwent London to create a business improvement district in the neighbourhood without any public consultation.

Derwent London then engaged public relations company Soundings to manage “community engagement”. In May this year Soundings and Derwent announced a package of grants and invited community groups in Fitzrovia to bid for funding.