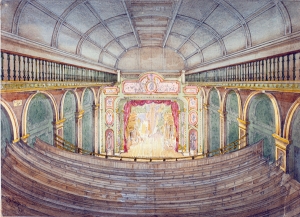 Watercolour drawing from c1880s of inside of theatre.

Walking from the BBC headquarters on Upper Regent Street towards Oxford Circus, your curiosity might be aroused by a small entrance hall recently redecorated with smart marble surrounds and the word ‘Cinema’ embossed on the upper window. The doors are locked and the cinema has been closed to the public for 30 years. All that is about to change. The building is owned by the University of Westminster and the ‘cinema’ is actually a lecture hall, replete with stained carpets, fraying seats and a spattering of coffee cups abandoned beneath the seats. The University plans to restore the hall to a state of the art screening facility to be enjoyed by the public and students alike. The focus of their campaign is the hall’s heritage as the ‘Birthplace of British Cinema’.

The claim is twofold. On 22 February 1896 the hall was the venue for the first public screening of a moving image in the UK – the Lumière brothers’ ground breaking Cinématographe, which had been shown for the first time in Paris the previous year. The event was not widely attended. Fifty-three people paid a shilling, or sixpence if they were members of the Royal Polytechnic Institution who owned the building at the time, to watch the series of 10 films. They included the (now) famous scenes of workers leaving a factory gate and a train pulling away from the station at La Ciotat. The press coverage was unanimous in its praise — The Times called the films ‘extraordinary.’ Reporters were impressed by the realism of details such as smoke curling from the cigarettes held by card players, and the hustle and bustle of a city square in Lyon. The reporter of the Daily News said ‘it was as if one stood in the street for a full minute and watched the crowd go by.’

The Regent Street Building from the first half of the 20th century showing on left the ‘Polytechnic theatre’.

The Lumière brothers’ own claim to the title ‘The Fathers of Cinema’ lies in the fact that the Cinématographe demonstrated the first projected moving image. Contender Thomas Edison’s earlier Kinetoscope (1891) in contrast was a peephole box allowing films to be watched by a single person. And while the Lumières were developing their technology in France in 1895, British inventor Robert Paul and photographer Birt Acres were making breakthroughs of their own, leading to the first commercially produced 35mm projector in Britain, the Theatograph. For while they collaborated, but soon parted because of a rift over patenting. Acres privately demonstrated his projector, (known variously as the Kinetic Lantern, Kineopticon and the Cinematoscope) to the Royal Photographic Society as early as January 1896, but it was almost a month after the Lumière’s Cinématographe opened on Regent Street that Paul’s Theatrograph was to be publically demonstrated.

The Cinématographe brought more than just technical innovation – it also laid the foundations for the way that subject matter was developed in film. Pioneering film director Cecil Hepworth, whose father was a lecturer and Lanternist at the Polytechnic, said that the Lumière brothers were the single biggest influence on his work other than his father. In his biography, he describes how those first films, with their simple plots and use of humour, led to the development of drama, storytelling and documentary in film.

The significance of the Regent Street venue within the development of British Cinema is not limited to the Cinématographe demonstration. The original Polytechnic Institution already had a reputation for demonstrating scientific invention in the early eighteenth century and had public display halls similar to those later seen at the Great Exhibition. In 1848 the hall was added to the building, purpose built for popular visual displays such as Magic Lantern shows. It was here that famous optical illusions such as Pepper’s Ghost were performed, which featured a ghostly figure projected from below the floor that appeared to be able to float through solid objects on the stage. The configuration of the hall to allow such illusions in effect made it the first purpose built projection room in the world.

So what of the future for this historic venue? The University has just received confirmation of Heritage Lottery Funding to complete the project, having already been awarded an HLF development grant in 2011, and is looking to raise around £6 million in total.

The restored cinema will provide a single-screen semi-public cinema with specialist film programmes, masterclasses and community and learning programmes. Vice-Chancellor Geoffrey Petts is keen that the project benefits those who live and work nearby: ‘This isn’t just about nurturing our own talent… it’s about sharing, partnering, reaching out.’ As well as state of the art screening facilities, the cinema will have traditional projectors for 35mm screening, making it a rare gem for specialist filmmakers.

The University’s film school has a strong reputation and the campaign is supported by some of its high profile alumni, including Senna director Asif Kapadia and Paul Tribijts (Ruby Films). Tim Bevan (Working Title Films) is also on the Board. Tribijts told me: ‘As a University of Westminster Film School alumnus, I am really proud to be supporting this campaign. It’s not just about the heritage of the place, it’s about the future for young filmmakers, who need venues like this to showcase their work.’

For further information about the project, please visit www.birthplaceofcinema.com.