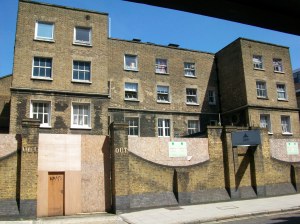 The former Strand Union Workhouse building in Cleveland Street. "A building which during his lifetime Charles Dickens could have happily seen ground to dust."

It is a modern irony worthy of the man himself. A building which during his lifetime Charles Dickens would have happily seen ground to dust, was recently saved only through emphasising his connections with it. Called in to help the campaign to save the Covent Garden (later Strand Union) Workhouse on Cleveland Street, the historian Ruth Richardson pulled out a gem: Dickens had lived only nine doors away. Twice. The cult of Dickens worked its magic, and at the eleventh hour the campaign won its longed-for listing and stopped threatened demolition.

Dickens and the Workhouse, published by Oxford University Press, is the book resulting from Richardson’s research. It traces his time in Cleveland Street and the surrounding area, his associations with workhouse inmates, and campaigns to improve their conditions. Richardson argues that the Cleveland Street workhouse was not only the model for Oliver Twist, but remained a shadow on Dickens’ mind throughout his life.

A workhouse existed in most of the many neighbourhoods where Dickens lived before writing Oliver Twist, but Richardson makes a strong case for the Cleveland Street workhouse being his main inspiration. He lived at what was 10 Norfolk Street, now 22 Cleveland Street, first for two years between the ages of three and five, and again for two years during late adolescence.

Both Dickens’ parents had many ties to the neighbourhood around Cleveland Street. His father was baptised at St Marylebone Church and grew up in the area; several uncles and a grandmother lived in streets immediately nearby. Richardson argues that even their landlord, about the same age as Dickens’ father and also born in Marylebone, could have been a family friend.

During the second two years on Cleveland Street Dickens learned shorthand and got his start in journalism. Dickens’ own early ‘shabby genteel’ shame fairly drips from the copperplate address printed on his business card: ‘No. 10 Norfolk Street, Fitzroy Square ‘- not ‘Middlesex Hospital’, the landmark then commonly used to place his street. He left as soon as he could, and later on he spoke about his residence there only once. Richardson meticulously shows that the area, nonetheless, appeared time and time again, often covertly, in his books and essays.

As an adult Dickens supported the first society to improve workhouses, itself founded by the surgeon at the Cleveland Street workhouse. Richardson also explores Dickens’ sources of names for his characters, and shows how he tapped those of residents in Norfolk/Cleveland Street throughout his work. These include William Sykes, a tallowman whose shop faced the workhouse.

Dickens and the Workhouse suffers from a general problem in modern book publishing: neglect of editing and production, possibly made worse by its hasty publication to coincide with Dickens’ 200th anniversary. Repeated reminders in the first part of the book that Dickens often ‘used his own life in his work’ made me throw the book down several times. A lively description of what the author found out about Dickens’ earlier time at Norfolk Street is in there – but described as sensations of the infant genius, with so many uses of ‘might’, ‘possibly’, ‘surely’ and ‘it can’t be proved, but…’, the thread is difficult to follow. Meandering through this confusion are Richardson’s own tortuous (and tedious) search for the exact location of 10 Norfolk Street, and the progress of the workhouse preservation fight.

Inaccuracies have been allowed in which a slight amount of attention might have corrected, like the American-sounding assertion that Dickens’ more famous home in Doughty Street is ‘only twelve blocks away’ from Cleveland Street when it’s actually over a mile. She claims that the use of the spelling ‘shew’ for ‘show’ was particular to Dickens – it was common until at least the 1840s.

She is on one occasion even allowed to contradict her own evidence. Despite quoting a vivid description from Dickens’ close friend John Forster about how sickly Dickens was as a child, unable to participate in sports, and that this forced inactivity inspired him to read, Richardson insists on ‘hyperactivity’ in Dickens’ early years, based only on what he became in later life.

Most frustrating however are the reproductions of contemporary maps and cartoons which could have illuminated the narrative. The originals were well-chosen, but presented here are far too small, and inexcusably in this digital age, often mired in grey! For the expense of a £17 hardback the repro quality is worse than that of many far cheaper local history pamphlets. The effort expended by Oxford University Press on breaking up the text with charming details from Cruikshank could have gone better into clarifying, if not enlarging, the more pertinent illustrations.

Once the author finally pins down the location of 10 Norfolk Street, arrives at winning the campaign to list the workhouse and the Dickens family leaves the area for the first time, her pace picks up. Richardson is particularly good on Dickens’ later residence in Norfolk/Cleveland Street, Poor Law history, and the efforts of earlier campaigners to expose and improve workhouse conditions and the treatment of impoverished sick and elderly people.

The stories in the last half of the book are truly appalling. Here are Dickens’real-life blue prints: the corrupt Poor-Law governors dining lavishly on the rates; the indifferent baby farmers skimping on food for their charges; the mean-spirited workhouse keepers selling older children to whomever would have them. Their Malthusian justifications resonate uncomfortably during the current discussion of welfare and NHS reform.

The Cleveland Street workhouse seems now saved for future generations. The welfare state, which eventually redeemed the site’s reputation by making it the home of Middlesex Hospital Outpatients Clinic, and grew out of evidence Dickens and others publicised over several generations about the causes and amelioration of human misery, is not so safe. As described by Richardson, they found that while children are at random born into comfort or poverty, the effects of both are largely predictable. Suffering, injustice, waste, and corruption inevitably result when society tries to separate an ‘undeserving’ minority of poor from the ‘deserving’ majority, and then subcontracts to profiteers its duty to look after them. If Dickens stood for nothing else, it was that as humans we all deserve humane treatment, however we arrive at our present circumstances.

To quote Thomas Paine, there is a danger that the campaign to save the workhouse ‘pities the plumage, but forgets the dying bird.’ As well as saving the building which Richardson proves beyond doubt was a singular object of Dickens’ hatred and dread, will campaigners and policy makers remember the lessons he learned on Cleveland Street, and worked so hard to teach the world?

I supported saving the Cleveland Street workhouse not because Dickens knew it, nor for the rarity of its survival as an 18th century London workhouse — Richardson herself admits that it is hardly a beauty — but because it is an important local landmark in an area increasingly buried under anonymous steel and glass. No doubt if the building is finally developed for something other than the precarious housing it now affords single people, its brick façade will shine yellow like it hasn’t in over 200 years. Hardly like Dickens knew it, and thank goodness.

A return to the workhouse?

The unemployed, sick and disabled are again being vilified in the press. While many truly enabling programmes like free childcare and cheap housing are eroded, council budgets shrink and more private businesses go under, the unemployed (both sick and able-bodied) are threatened with sanctions for not looking ‘hard enough’ for a job. This now includes being ‘farmed out’ to businesses like Tesco.

Meagre disability benefits are available only through having to compile several demeaning catalogues of what someone can’t do (including toilet arrangements) for different agencies, and an extra inspection by doctors and nurses working for a private company, whose word is taken over that of GPs, hospital specialists and medical tests already paid for by the NHS.

There is now the threat of being forced to leave neighbours for the crime of having too many rooms, or as landlords take it into their heads to double or triple what had already been a good income. This faces a rapidly increasing number of Fitzrovians whether working or not. The NHS itself is on the verge of being broken up and parcelled out to profiteers. Whatever happens now to the workhouse site, in this political climate UCLH Trust, the site’s owner, gives income priority over social benefit.

Dickens and the Workhouse: Oliver Twist and the London Poor, by Ruth Richardson was published by Oxford University Press in the UK in February and in the United States in March.