Angela Lovely says Westminster City Council has done the right thing, Camden should follow suit, and the candidates for Mayor of London must stop passing the buck and get on with the job of making London a sustainable world city.

Little Titchfield Street at junction with Great Titchfield Street. Double yellow lines will now be painted on the street corners to prevent motorists blocking the road and pavement. Motoring campaigners disagree with the plans.

Today the much talked about double yellow lines will replace single yellows on street corners in the southern part of Fitzrovia under the control of Westminster City Council. This will prevent about 1,200 cars from parking without charge and has been welcomed by most residents who quite rightly complain about cars blocking out streets and circulating looking for parking places. But a bit of yellow paint has come in the wake of a fire-storm of protest from the motoring lobby and its supporters. Mayor of London Boris Johnson has attacked the view of local people: "A substantial proportion of Westminster residents are actually in favour of this measure because they don't give a monkey's about the people (who) have to pay to park in Westminster," he told BBC News.

Boris ought to get on his bike and come to visit our neighbourhood which has some of the lowest levels of car ownership in the UK. It is little wonder that we residents support proposals to end free parking in Fitzrovia and now want Camden Council to follow Westminster’s lead and take immediate action to prevent the nuisance from motorists looking for free parking on their side of the boundary.

The majority of people living and working here use public transport, walk, cycle, or use car clubs. And those that do own a car pay for a permit and resent visitors and commuters parking for free. Camden sells visitors parking tickets to residents. No freebies here Boris.

Fitzrovia is potentially one of the greenest parts of London and it can be a pleasure to walk and cycle here. Yet anyone visiting the area would be forgiven for thinking it is is car hell. It is car hell at times, but they are not the cars of the majority of residents, commuters and visitors.

A group of business people have waged a campaign supported by the Evening Standard in favour of the car-drivers who blight the lives of us central London residents.

Now restaurateur Richard Caring is making a legal challenge to prevent double yellow lines at street corners. And in a letter to the Evening Standard, Labour’s Tessa Jowell wrote: “It is outrageous that Westminster appears to be circumventing the legal judgment on its parking plans by converting single yellow lines around the West End into double yellows.”

Do Richard Caring and Tessa Jowell seriously think drivers should be allowed to park on our street corners, blocking the pavements and clogging our narrow streets?

All sorts of excuses have been used by those defending the right of motorists to have free parking in central London. But the motoring lobby are the real “something for nothing” group. In real terms the cost of motoring has gone down. While public transport costs have gone up, car drivers have enjoyed a relative holiday with their costs falling compared to the retail price index. As transport consultant Dr Robert Davis has pointed out this is “largely because of the dramatic drop in the cost of cars, the motoring costs measured have fallen”.

Despite the media furore about Westminster City Council’s parking changes they are at least actually doing something to address the problem of pollution and congestion. Unlike all the candidates for Mayor of London, none of whom have any real proposals to tackle the problem. And it is the Mayor’s and Transport for London’s job to sort out any inadequacies in public transport, not Westminster City Council. But all the Mayoral candidates are passing the buck. All the candidates criticise Westminster, yet none of them put forward any real solution or show any proper leadership.

Even the Green Party candidate Jenny Jones has said she is against Westminster’s plans. Yet her colleague in the London Assembly Darren Johnson has commission a report into road pricing. It seems the Greens want to talk about charging motorists but not actually go through with it.

Westminster’s Labour councillors led by Paul Dimoldenberg are opposing the parking changes because of the “huge damage that this will do to the West End economy, including the loss of over 5,000 jobs”.

If all these jobs rely of the workers having to drive in their own cars to park for free in the middle of London, then these jobs are not sustainable. Why aren’t employers introducing environmentally-friendly and sustainable working practices?

Central London is served by a huge amount of public transport. It is the most well-connected city in the UK and has a comprehensive night bus network. London has a huge competitive advantage compared to other cities because of its position at the heart of the UK’s rail network.

A massive number of people move in and out of London by public transport, cycling or walking everyday. In Fitzrovia alone, around 50,000 people work in an area with a residential population of around 8,000. 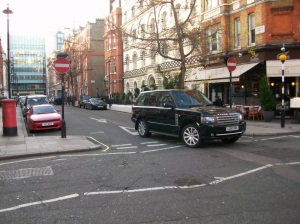 In real terms the cost of motoring has come down. But drivers still expect to park for free.

Why should people expect to drive in and park for free? Why should the health of central London residents, their families and children suffer because casino owners fear a loss in their profits?

If businesses fear their employees would no longer be able to afford to work in central London, then they should pay them a living wage.  If politicians fear that people will suffer because of public safety concerns or the inadequacies of public transport, then it is those issues they should be addressing and not opposing measures to control traffic. And should we respect churchgoers who believe they have a God-given right to inflict their pollution on others?

Westminster is not a green council by a long way. Their plans to cut congestion do not go far enough. They allow new building developments to include both on and off-street parking. The proposed new development on the former Middlesex hospital site has nearly 200 car parking places included in the plans. Local people have strongly opposed these parking spaces.

And Westminster have been unfair on people with disabilities who often do need to use a taxi because they have removed the Taxi-Card scheme. They should now use any increased revenue from parking charges to reinstate the scheme to help those who are unable use public transport.

But disability campaigners have welcomed Westminster’s deployment of double yellow lines on street corners to prevent cars blocking dropped kerbs, because it is essentially about enforcing the Highway Code rule about not parking on junctions.

Residents here in central London are leading the way in living without cars, and London is capable of being a more sustainable world city in 2012. But it is hampered by politicians who haven’t got the will to stand up to the motoring lobby and cut private car use. This nettle needs to be grasped and the time is now.

6 Comments on Westminster City Council is right to end free parking, now Camden should do the same