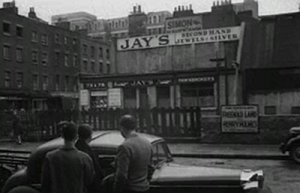 The scene of the murder outside Jay's Jewellers on the corner of Tottenham Street and Charlotte Street.

The scene of the notorious murder that inspired The Blue Lamp will today be visited on a guided walk led by writers Paul Willetts and Cathi Unsworth, and artist Garry Hunter. The event is part of the Fitzroiva Noir arts trail currently taking place all over Fitzrovia. The walk will also be joined by local author Mike Pentelow as he concludes his week-long tour of Fitzrovia's pubs.

From 2pm until 4pm Paul Willetts author of North Soho 999, accompanied by Cathi Unsworth and Garry Hunter, will lead a guided walk through Fitzrovia’s fetid streets starting at the Marquis of Granby and ending at Wheatsheaf, Rathbone Place.

If you wish to attend, please join us outside the Marquis of Granby, Rathbone Place on Saturday 2 April at 2 pm. The tour lasts approximately 90 minutes and is followed by a book signing event upstairs at the Wheatsheaf, Rathbone Place from 4pm to 6.30 pm, featuring Paul’s writings, works by local authors and books by artists featured on the art trail. See fitzrovianoir.com for updates.

1 Comment on Writers, artists and boozers return to the scene of the crime